You are here: Home / Divorce / Know the rules: tax consequences of dividing property in divorce. 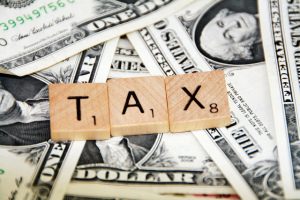 Getting divorced is tough. Two lives joined together are split asunder and the last thing on anyone’s mind is taxes. However, understanding the impact of taxes on a property division is key to making sure a division of property is truly equitable. Hidden taxes in the property divided can further aggravate what might already not be an equal division of the marital estate. The reason for this potential disparity is simple: IRC § 1041.

IRC § 1041 governs the tax treatment of transfers between spouses and divorcing spouses. It applies to a gift, sale, exchange or other transfer. Congress believed that whether during marriage or through divorce the transfer of property between spouses should not result in either a gain or loss. While no gain or loss is recognized on the transfer, the recipient spouse obtains a basis in the property equal to what it had in the hands of the transferor. Homes, stocks, bonds, mutual funds and business assets fall under the category of property where the fair market value is normally different than the basis. Generally speaking the property’s basis is the purchase price.

IRC § 1041 is automatic so there’s no way to elect out of the tax-free treatment if the transfers fall under IRC § 1041’s umbrella. Even if the spouses intend for a transfer to qualify as a sale, no gain or loss is recognized. IRC § 1041 applies to either any transfer made within one year of the divorce or to transfers made within six years of the divorce becoming final if made pursuant to a divorce judgment or separation agreement. Transfers made within one year after the divorce becoming final are presumed to be covered under IRC § 1041, even if the transfers are not covered in any divorce judgment or separation agreement. Transfers made within six years after the divorce are final only fall under IRC § 1041 if the transfers are made pursuant to a divorce judgment or settlement agreement. Both of these types of transfers cover a wide variety of transfers between divorcing spouses. There are exceptions to this general rule (isn’t there always!) but these exceptions do not normally apply in most divorces, such as transfers to non-resident alien spouses or transfers to a trust on behalf of the other spouse.

While on the surface this tax treatment sounds pretty good – who wants to pay taxes on a transfer between soon to be ex-spouses. The problem is that there are hidden tax consequences that lay dormant until the transferred property is later sold, transferred or otherwise disposed. IRC § 1041 provides that the basis of the property exchanged remains the same in the hands of the recipient spouse as it does in the hand of the tranferor spouse. Because no gain or loss is recognized there is no step up in basis to fair market value. It is this little provision that creates the tax trap. No one who is getting divorced is really thinking about this issue and so what might appear to be a fair settlement based on the current market values of the property may be less than what was bargained for due to taxes. Investments, retirement accounts and property that has been depreciated (like a rental property) are the things that normally come to my mind.

Here’s a simple example to highlight the problem:

On the surface this appears to be a fair division of the property. Both are walking away with 50% of the marital estate. Only later when Ted decides to sell the stock does the problem arise. Ted is going to recognize at least a $25,000 gain upon the sale, assuming that the stocks increase in value.  Ted’s basis in the stock is $25,000 not $50,000. So he is going to have to pay taxes on the gain embedded in the stock he received. Martha on the other hand has cash, which has a basis equal to its face value – so $50,000. Martha’s $50,000 was tax free while Ted’s stock was not. Ted gets something less than $50,000 for his share of the marital property.

While this is a simple example, imagine if both Ted and Martha had a bunch of stocks, mutual funds, company retirement and a business in the mix. Things can get complicated very quickly, which is why careful consideration of the problem is needed.

In summary, it’s important understand the tax rules regarding transfers between divorcing spouses. Dividing up the marital estate is not simply a matter of valuing the property and then parceling it out. Care has to be taken regarding potential taxes that may crop up when the property is later transferred, sold or otherwise disposed of. By taking into account the taxes due on a later sale it may be possible fashion a more equitable division in the divorce judgment or separation agreement.

If you have any questions or concerns about what I’ve written please feel free to contact me by phone at 207 – 299 – 0515 or by emailing me using my contact form.

Want to stay up to date on the latest tax news and updates?
Subscribe to our email newsletter using the short form below and read more about changes in the IRS tax code, stories about tax problems we’ve solved for people in Maine, and more!

Personal attention
on every case

He met personally with the IRS case agent on my behalf and was able to get an agreement for the exact plan we’d hoped for. He further recommended that we attempt to get an abatement of some of the penalties and interest, and ultimately was successful in knocking about $70,000 off the amount due. An incredible result!

Throughout the process Jim proved incredibly knowledgeable and adept at dealing with the IRS. I’m certain that his cooperative and conciliatory demeanor contributed to my case’s being settled through easy and early negotiations.

Jim Wade will be by your side!

Jim always was incredibly easy to reach with any questions or concerns, and kept me and my family up-to-date at each step in the case. His help extended, though, beyond just dealing with the narrow issue of the unpaid taxes.

He additionally guided me on steps to take, including a referral of reputable accountants, to avoid future tax issues. I had the feeling throughout the whole process that Jim really cared about our case and us individually, and the incredible results certainly confirm that.

Jim will be my first contact if I ever need legal services again, as I know he’ll give me the guidance I need whether it’s strictly within his field of expertise or not. He’s a fantastic attorney and person.

Worth every penny!
D.T., Clients from York County, ME

My husband and I were thrilled with our experience with James Wade. From the first phone call, he was kind, knowledgeable, and compassionate towards our financial situation.

James was efficient in explaining the procedure and was readily available when we had questions. If he didn’t answer right away, there was always a call back or an email soon after.

James was worth every penny and now we can have a fresh financial start. We can’t thank him enough! With the overwhelming and complicated paperwork, you want to hire James to get the job done right.

An incredible result!
David G., a tax resolution client from Falmouth, ME

I engaged Jim Wade earlier in 2018 to represent me in an IRS collection case arising out of several years of unpaid personal federal taxes, and was impressed by his professionalism, knowledge of tax laws, and experience in representing taxpayers before the IRS.

At our first meeting he explained clearly the IRS collection process and recommended a number of steps I should take to put our position in the best possible light. He worked closely with me to gather all necessary information and formulate an offer of a repayment plan for the nearly $360,000 I owed in unpaid taxes, penalties, and interest.

This attorney was extremely helpful in guiding us through the process from beginning to end. He was patient and kind and when I did not know where to find information needed he lead me to right place. I could not have asked for a better person to assist us during our own difficult times.

Excellent
D.R., a prospective tax planning client from Fryeburg ME

Answered questions. Very receptive. Will see him in the future.
​

Amazing Lawyer
R.C., a client from Robbinston, ME who filed for innocent spouse relief with the IRS

I had no problems or had to worry about anything. My case was taken care of with out any problems. Any questions I had was answered quickly and explained thoroughly, and as little as I know about taxes there were a lot of questions. Highly recommend Mr. Wade!

Jim is Amazing
Will P., a client from Westbrook, ME

Jim is amazing. His attention to detail is unmatched. Jim will do whatever it takes to insure a positive outcome. His knowledge and experience are two of his biggest assets for helping clients. In a day where communication is often a strain, Jim breaks down that barrier and kept us informed at all times.

After our first meeting with Jim, we knew we had made the right choice for our needs. Jim leaves nothing to chance and is relentless towards achieving the desired result. The world needs more lawyers like Jim Wade.

Recommended to anyone with tax issues!
Heather C., an IRS Resolution client from Monmouth, ME

My husband and I were looking to qualify for an offer in compromise with the IRS to pay off taxes that we owed. We hired Mr. Wade for a very fair price. After he investigated and crunched the numbers in every way possible to help us, he concluded that we would not qualify.

His commitment to helping us did not end there. He continued to work with us to pay off our taxes, offering his expert advice. He answered all our questions thoroughly and continued to help us see this through to the end.

We are very grateful for all of his hard work, his knowledge in tax law, and his full commitment to us as his clients. I would recommend his firm to anyone who needs help in taking care of and resolving any tax issues they may have no matter how big or small.